There have been some heated discussions around the mint and burn fee’s on the forum.

One thing that is not totally clear to me is why one would raise the burn fee instead of the mint fee.

The purpose of this post is to gather the motivations around this, mainly for my own understanding.

Let me try to explain how I’m currently thinking about this.

First some facts that will necessarily hold:

This means that, all things being equal, an increase in the mint fee has the same, or even better, effect on the total fees generated as an equal increase in the burn fee.

The only time this does not hold is when TVL > 0 when the fee change is made, and in a particular period burning volume > minting volume. In such a scenario, increasing burn fee yields a higher total fee at the end of said period than an equal increase of the mint fee.
However, this only holds for as long as burning is greater than minting.

The other thing to consider is the TVB/TVL ratio, and the role that the fees play in keeping the ratio favorable.

Without going in to this too deeply, the way I think about this is that it is always better to have a relatively low burn fee to not dis-incentivize burning, and to keep burn-and-mint transactions economical.
One argument that has been made is that it is good to keep the burn fee at a “high” base level so that we can lower the fee later to incentivize burning when we need to lower the TVL. This however suggests that there was a pent up burn demand which I think should be avoided in the first place.

This means that the main lever to control the ratio will be the mint fee.

Lastly, the only other thing I can think of is psychological on the UX side. Where a 20 bps fee now and another 20 bps later (when burning) feels smaller than 30 bps now and 10 bps later. Also the UI might just show the mint fee when minting and the user might not know about the burn fee.
But I tend to think that because most of our volume comes from high value transactions, they are more sophisticated users that are not fooled by this

Long story short, I don’t really see a compelling reason to increase the burn fee when we can increase the mint fee instead.

Thanks for sticking with me so far, would be great to hear some more thoughts around this.

I don’t know if this is relevant to the conversation. If I have renBTC and I want to convert to Filecoin or
Digibyte, do I have to burn back to the original asset before I can mint to a different asset? If this is the case, the burn backs should increase in volume as other blockchains gain in popularity. Also consider this, those that buy or convert renBTC on any blockchain where it is supported, are currently paying less to convert than the client that minted the original BTC, which is not always the original minter. At some point raising the burn price may just be a question of what value can be gain by moving the asset/s in and out of different blockchains and with that there is a need for partner chains to better explain simply what services are being hosted/offered on their chain. Currently emphasis are on the benefits and offering
aimed at developers. Where are the everyday use cases? No matter how small they need to be trumped.
Food for thought.

If you have renBTC and you want to go to renFIL on the same host chain (e.g. Ethereum) you cannot do so through RenVM. You will have to sell one asset for another through for example Uniswap or on a centralised exchange.

If however you want to move assets from one host chain to another (e.g. Ethereum to BSC) this is called a burn-and-mint transaction. For example to move renBTC from Ethereum to BSC the renBTC will first be burned on Ethereum and then be minted on BSC, incurring both a burn and mint fee for a single transaction.

I agree with this, as I’ve mentioned in other posts as well, modifying the mint fee works better in our favor to balance the TVL versus the monthly income, for a number of reasons.

I’m also wondering what people think of lowering the burn fee to 8 or 9 bps instead of keeping it at 10 bps. Psychologically that might make it more easier for folks to burn, while increasing the volume more than we would lose on that fee reduction, earning us more in the end. Also we could increase the mint fee to 26 bps to offset that anyway, don’t think folks notice a difference between 25 and 26 bps, but 10 to 9 is noticable.

Ren bot has been humming with the mints and burns, personally lowering anything right now, imo isn’t a good move. I think the mint fee if this epoch keeps going strong , should be increased and left at 0.3% and if the following epoch or 2 continues strong as well, then the burn fee should be raised accordingly as well( I’m opposed to those who mention continuous burn fees however.)

Yes, with the recent increase in the volume of Mints, I put together a quick RFC to raise Fees to 0.3%, in theory, based on the last RIP we should have had the conversation before this epoch began, but I think at this point, it is clear the conversation should be brought up and fees should be raised to address the increase in volume. 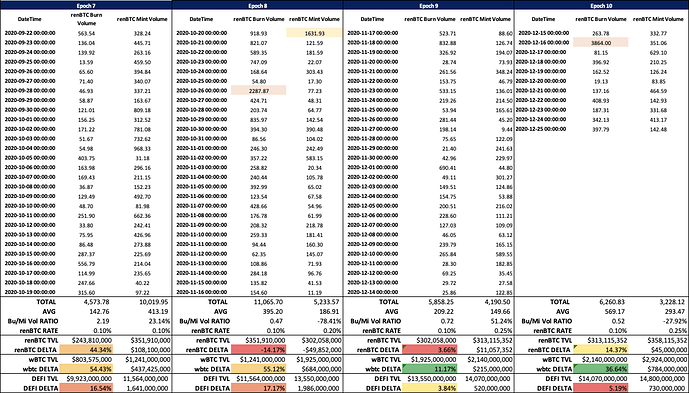 As this table of mints and burns would show, if we maintain the current velocity of volume this EPOCH renVM is looking at MINT volume that will surpass Epoch 8 when we began MINT fee raising, this might suggest that the lowering of the volume was more related to the inflows and outflows of DEFI rather than our raising of the fees.

Thus our fees are too low. Based on the agenda set forth in RIP-000-001, and following through to RIP-000-003, we can proceed with raising MINT fees to find a point where we actually impact volume materially.

I would be for reducing the burn fee down to 0 bps even. Mybe 5 bps to begin with and increase mint to 30 bps…

I agree with focusing on the mint side when it comes to raising fees.

You guys seriously think that people decide to do more burning because of the burn fee? I find that ridiculous. Burn fees lesser than 0.3% do nothing. People are keeping BTC as renBTC because they are earning yield somewhere with their renBTC and they will burn to BTC only if they want to liquidate that. A measly 0.1% or 0.2% even ain’t going to prevent them from making the decision they already made with what they want to do with their RenBTC. Unless the goal is to be established leader for hackers who want to exit to BTC via RenVM then a 0% burn fee makes sense.

The only way to increase velocity and not TVL of BTC on RenVM is to increase mint-burn use cases for BTC. That’s it. The fee changes that have been made are just optimizing around the edges.

I very much agree.Darknood operators are more sensitive about mint/burn fee than those who are earning yield with wbtc and renbtc.

Huge +1 there, people are earning and farming their minted renbtc at pretty high Apy out there in the defi world, they also know that moving forward since ren is the only way to do this( where decentralization will be implemented ) that they would rather now come to mint on our network , because we stand for going fully decentralized and they like our mission and obviously they like a fast mint to get their btc earning ASAP.

Where is your proposal? can you shoot me the link plz. I think in order to move forward it has to be in its own new category proposal.

It is waiting to be approved by admin

Sorry for the naive question, but I still can’t get thoughts straight around that MINT/BURN fees discussion.
Why would it be better to increase the MINT fees over the BURN fees ?
Should we not try to lower MINT fees; to lower the barrier of entry in order to increase the TVL? The more volume is locked the more will be burned in the future. It is like accepting receiving lower rewards at the beginning to get more later, while incentivizing people to user RenBTC over wBTC for instance.
Having a higher MINT fee might have an impact on people willing to use RenVM. In any case; and as stated above, once one decided to burn their RenBTC, no matter at what BPS is the BURN fee to pay, it won’t impact their overall decision. Thus my overall coneption of having low MINT fees and higher BURN fees.

Could you please highlights my lanterns and tell me where I’m “wrong” in my reasoning.

Imo fees should never be above 0.3% or else people will use exchanges instead of renbridge

we are trying to lower the tvl relative to ren bonded. We dont like tvl we like velocity

Imo fees should never be above 0.3% or else people will use exchanges instead of renbridge

You have a good point. Here are exchange fees for 2020 for a comparison.

Thank you.
If velocity is the main goal; then why simply not keep the same fees for minting and burning, rather than trying to weight any of them?

I believe some of the reasoning is that Ren is a desirable service - the easiest way to get BTC (and other assets) onto Eth and other smart chains without needing to KYC or get permission. So people will use it as long as fees are not prohibitive. We could leave mint/burn the same at .1%, but if raising fees a little does not slow down volume more than the additional revenue is earned, it is better to raise the fees. If we make the mint fee higher than burn fee, then the bulk of the total in/out fees are paid up front, which is good for us, and then when the user wants to exit he has a minimal fee waiting so this does not dissuade him. The hope is this keeps volume flowing. You could look at it opposite and imagine what would happen if mint fees were very small, and burn fees higher - more people would mint and stay in the system which does not help us, it increases our TVL and responsibility without much earned.
That being said, we are still in the early and experimental phase of the project and things may change if a logical proposal is put forth with a different angle

Very clear. Thank you for the detail explanation. Then it actually makes sense to have a higher MINTING fees compared to BURNING fees.