Can someone give feedback on the FTX, FTT Alameda saga that continues to unfold in the space and how this can effect the REN Lab/Protocol project. 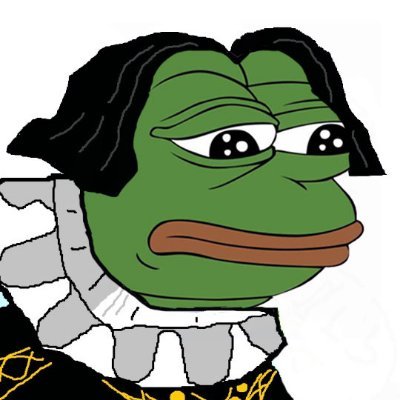 @BlockchainBard_
Ren & Alameda | A brief thread 🧵 Time for a clarification thread to dispel a lot of the FUD/ hysterical claims being made about @renprotocol recently on this site. Some of these falsehoods are being spread by rival projects, and uninformed individuals just flat out lying. $REN

This is a good twitter thread summing this all up.

here is a sum up towards the end:

Announcements in the discord also mentioned the team is considering pushing the “chaosnet” the testnet for the REN2.0 evm network, to launch it earlier than planned. Keep an eye out for a medium post and an AMA coming in the next few days.

My concern is there’s some likelihood of Alameda’s REN stash being sold on the market, tanking REN/BTC price. If this happens,
a) Darknode operators’ bonded REN lose value
b) It becomes cheaper to attack or DOS the network

Alameda “has no control” of Ren assets? I suppose that depends on what the word “control” means… Because Ren Labs confirmed in an earlier AMA that Alameda owns all “assets and IP” of Ren (not future versions of Ren, apparently).

Ren Labs also confirmed in that previous AMA that they are merely an “outsourcer” to Alameda on Ren. So if Alameda owns existing IP, isn’t it reasonable to assume a bankruptcy lawyer would look to seize control of those assets or revenue streams owned by Alameda? Why not? Alameda may have no control now over existing keys, but legally, can’t they get control, since they own those assets?!? Isn’t it reasonable to assume they can, or will at least try?

So to avoid the constant gaslighting and half answers (always coupled with “but just wait for Ren 2.0!”), can someone please answer this:

1 - Who controls the RenVM multi-sig today (the 13 greycore nodes that actually control Ren execution and consensus)? Documents say the “Ren team,” but what does that mean after the Alameda acquisition? Do Ren Labs employees control greycore? Others? A combination? Isn’t it reasonable to assume other projects will walk away from Ren without clarity on who controls the funds in RenVM?

2 - What happens if a bankruptcy court demands keys to the Ren multi-sig controlling RenVM, what is Ren Labs’ response? As Alameda owns RenVM assets and IP, and Ren Labs is only an “outsourcer” to Alameda, seems like a reasonable course of action, no? And so isn’t it reasonable for other projects to avoid this risk and reduce exposure to renBTC and other assets without clarity here?

3 - Alameda was paying Ren Labs as an “outsourcer” for Ren development. I assume this was part of the acquisition agreement (but of course I don’t know because no details were ever shared). This money is obviously not coming any longer. How will Ren Labs finance existing maintenance and support of RenVM, plus future development of Ren 2.0, since there is almost no money in the Ren Community Fund for this? Will Ren Labs subsidize Ren 2.0 development from their Catalog funds? Some other source? So who is paying Ren developer salaries moving forward?

4 - As noted, Ren Labs claimed in an earlier AMA to be working on Ren as an “outsourcer” to Alameda. Isn’t that agreement no longer valid? What is the legal relationship between Ren Labs and Alameda today, in light of the recent bankruptcy filing? If Ren Labs was only an outsourcer to Alameda, how can Ren Labs continue to work on the project (current RenVM) with no legal authority?

Thanks in advance for providing clarity on these important issues!

a couple of your questions are based on false assumptions on the ren IP. The other ones on funding and multi-sig are questions that others have asked to be answered at the upcoming AMA.

from the most recent announcement on discord

Q: Ren “IP” status A: The Ren 1.0 code that isn’t open-sourced yet can be open-sourced per our agreement with Alameda. The Ren 2.0 code is fully community-owned with no ties to Alameda, and definitely is not affected by this event, and will be out with the launch of the first public testnet either late Q4 or early Q1.

Q: RenVM status A: Given that we will be transitioning to Ren 2.0 network early next year and Ren 1.0 (RenVM) will be sunset, we are considering accelerating this process, perhaps by launching Chaosnet 2.0 sooner, and only allowing withdrawals from RenVM, not new deposits. For this we need community participation, to decide the best way forward to minimize Ren “downtime”.

Q: Alameda REN holdings A: We unfortunately don’t know how much $REN Alameda holds/will hold given the current turmoil, but when/if we learn their future plans we will share it with the community if Alameda are okay with sharing those numbers.

Q: Ren funding* A: We do not have a clear picture yet from Alameda on how they wish to continue backing the Ren Labs team, as we are waiting to sync with them. But as soon as we know, we will share those news with you. Currently Ren Labs gets paid quarterly for the operational expenses, the Ren team’s current funding from Alameda stretches to the EOY and we believe that we can figure out a way together to keep Ren alive no matter what happens with the current situation. As mentioned, we’ll aim to have a more detailed blog by the end of the week. Apologies for this tardiness on our end and how that might have lead to worry to some of you, to some degree we have as much information as you do with regards to how Alameda intends to move forwards, and just wanted more time to find out some more. But ultimately this event will not harm Ren, it will even speed up our transition to Ren 2.0 with full independence for the community, allowing us to be in a stronger and more independent position together! 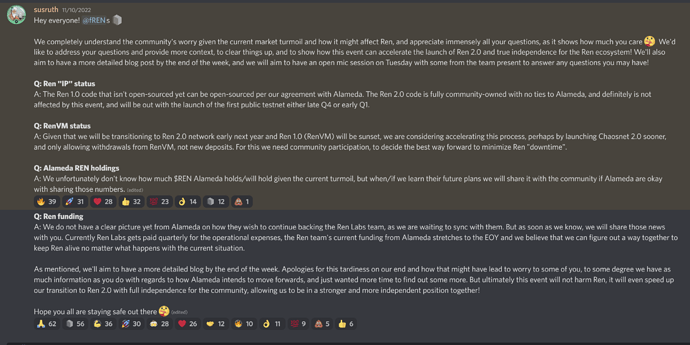 Well, thanks for your reply, but it doesn’t answer any of my questions.

Interesting that now Ren Labs is saying they can open source the Ren 1.0 code, they no longer need approval from Alameda (which, obviously, doesn’t exist now anyway). Since Ren Labs can do this, why don’t they do it asap? As I recall, the excuse for not open sourcing all the code was put on Alameda, but this was apparently not true? In any case, when can we expect to see the full code? Would probably help market fears over possible confiscation of funds.

I’m still adding nodes to my portfolio. If a bunch of token gets dumped on the market, I would actually welcome the price drop. At some point, I accepted the risk that this project would eventually decentralize itself.

The RenVM is still performing as expected. The latest epoch showing 0.0078 BTC earned per node, I wish it was at least 0.01, but earned fees have been relatively steady throughout this bear market. Some operators are bailing, but we’re also seeing dozens of new operators added as the price per node is much more affordable now.

As someone once told me, just hold the node, it’s basically a printing press for BTC in the future.

Overall, I don’t really care about FTX and Alameda, from what I see, it was just a means to help subsidize development costs. But, those working on the REN project have several nodes in operation, they aren’t just going to throw away a good protocol. Given how crappy the market is right now, there is little option other than to keep improving on a good project.

I’m optimistic I guess, so I’m still adding more nodes when I can afford to.

The community call was, let’s keep it real, incoherent. It seems we can open source the software but we’re not opening sourcing the software (why not?). It seems Alameda has no ability to touch renBTC but we can’t confirm that. We learned we have no relationship with our major partners, Curve and Badger. Badger is openly hostile to Ren and is actively moving away from Ren. We learned we’re paying 700k USD per quarter for 10 employees, or around 280k per person per year annually. Which is outrageous. We learned Catalog cannot finance Ren development, and that development stops without a cash infusion after Q4. We learned Catalog maybe can’t operate without Ren, but on the other hand, Catalog investors don’t seem too concerned, so no doubt they have a Plan B if required. We knew Ren Labs was working as an outsourcer to Alameda for Ren 1.0, but we learned the Ren Labs team think they have full rights to open source the code that they developed while being paid by Alameda, something I think could easily be challenged in court. Ren Labs seems to think they have the rights to open source the software based on prior discussions with Alameda, but of course, no details were provided… And the best thing we learned was Ren Labs has apparently never seen the agreement that was signed between the initial founders and Alameda. But I’m sure Ren Labs has seen the agreement they signed with Alameda, right? Maybe we can start there and you could provide a copy of that? Clearly you signed it, so you have it, right? Does it say you have IP rights to the code, yes or no? Again, Ren Labs had to sign something with Alameda, right? It’s how you were getting paid. So what does it say about IP rights???

Ren needs to take control of the Development (community) Fund asap. If Ren has committed this money to someone else, that should be stopped now. We are in an emergency situation and now is not the time to finance anything that isn’t about survival.

Ren needs to hire a lawyer ASAP. You are making a lot of assumptions that are just not going to be proven correct. Go to Lex Node and find a solid, web3 competent lawyer. My guess is any future solution that involves the current REN token will need to be rethought based on the Alameda fiasco. To be clear, just because someone from Alameda promised you that open sourcing is fine, that is meaningless without formal agreement. You don’t think an experienced bankruptcy lawyer is not going to look to claw back everything they can? You could turn this around and then discover in 4 years that all your IP is not really your IP, and owe a lot in back payments. Get a lawyer ASAP.

Perhaps the lawyer can take legal action against the former founders for selling the treasury to Alameda. Perhaps there are some claw back possibilities there? Clearly what happened was a cash grab, we all know it. Only question is how much they got, and if any existing team members received anything as part of that, as well. Perhaps Ren Labs could confirm?

You have 6 weeks to save Ren. Your partners have abandoned you. You don’t have legal clarity on your IP. There is no way Ren 2.0 is anywhere close to completion, so let’s stop pretending something will happen in Q1… You have almost no money. But you do have a strong community. That’s the only hope now. At least we can stop pretending and finally face facts.

Another idea: increase the Development Fund tax to 100% for the next 6 months (minimum, will likely need to be extended). All money collected should be used to finance Ren development (survival). DN operators can be given an IOU that will be paid back later in the form of REN tokens bought from the market, or whatever. This will buy you additional time. Maybe by end of Q2 you’ll have a better idea if Ren 2.0 is viable or not.