Name: Facilitate discussions of a Governance Framework post-Alameda Collapse
Category: Governance
Status: Draft
Scope: To gather feedback and suggestions from both Ren Team and Community on the best way forward in terms of Governance.

Alameda’s acquisition of Ren protocol had been plagued with speculation on the exact terms and conditions since inception. With the recent collapse of Alameda, we should not dwell on this specifics anymore but rather, reflect upon how governance can be improved to prevent similar scenarios.

This RFC comes at a time when Ren is in the midst of securing funding after the collapse of Alameda acquisition. There have been no proposals to change the governing framework yet - but it would be the perfect opportunity to do so before Ren’s operating budget is fixed.

I refer to my post in Discord here Discord which outlines the rough agenda for this RFC and the importance of timing especially in this fund raising window.

As per the recent medium article: Moving on from Alameda. Early last year, Alameda acquired Ren… | by Ren Community | Ren Project | Nov, 2022 | Medium , it is heartening to know that the community will be consulted through a formal governance proposal in the funding process.

The structure of the protocol should be that Ren survives no matter the external pressures and this means being self-sufficient in the long run. The DAO’s interest is not aligned to any other external entity and is only committed to Ren itself. It is the only entity that is neutral enough to implement the decentralization roadmap. It would be in the interest of Ren Team to plan for Ren DAO to control a significant stake to steer Ren’s vision. Hence, a key consideration for securing funding with external stakeholders is that a portion of funding has to be allocated to building this DAO.

As such, discussions in this RFC should revolve around how the DAO can be incorporated into the governance framework with significant stake.

Building of the Governance framework with the DAO will not be possible without the assistance of the Team itself. This RFC serves as a platform for both Ren Team and Community to engage on this topic fervently.

This is great to see… I was even writing something that I shared with Arviee. An Interim DAO Committee should be formed to represent the community as well as RenLabs to evaluate all proposals from the community and team, and present a formal framework for approval to the community. The framework shall cover, IMO, the pillars of the protocol, The token, The DAO, the Technology. It is imperative that this should be done with the collaboration of RenLabs and the overall goal shall be to come up with a plan to finally have a “decentralized community owned protocol”. I will workout the document and post here. I recommend as next step to launch a vote to select the members to form the Interim DAO committee ASAP, after determine the expertise needed.

Fully agree. The community should be part in the next steps before any on chain vote is put up for vote. This also ensures the community is aware of any details, IP rights and shareholders.
The Alameda deal was very foggy for the REN community and we have to avoid we are trapped in the next VC money deal.

As mentioned before, I agree with this RFC, we need to get this done, proper structure. Major issue is we do not have a DAO structure. Just random ideas/proposals without proper coordination will not ever work. I wrote a proposal to build an interim team to develop structure, roles and responsibilities, and plan for funding.

Attached my proposal that could be jointly develop to take for a vote.

Current structure failed to meet the objective to deliver what was promised, a decentralized community owned protocol. The protocol has been fully managed by RenLabs with very little input and almost no influence from the community on the decisions.

A DAO exists, but is very unorganized, no clear structure, no a dedicated team and no clear roles and responsibilities. The consequence is that communication with the stakeholders as well as participation of the community is not effective.

We should add that the previous leaders of Ren sold all treasury to Almeda leaving the protocol without any funds to guarantee the safe future of the project. That VC is gone and there is no budget for the different activities of the protocol after Q4 2022. RenLabs has mentioned several alternatives that some alternatives to get funds are being evaluated, but there is no involvement from the community.

As a conclusion, DAO without structure is not effective, as the results has demonstrated.
A proper DAO organization would offer efficient:
· Engagement with RenLabs and all parties
· Communication and participation of the community
· Identification and coordination of resources

The scope and R&R of the DAO organization is something way too complex to conclude in a proposal, therefore, shall be left open for discussion by an interim team and later approval by the community.

We must remember that this protocol has tremendous achievements, being the only one that has billions of dollars in assets transacted without a single crack in the code, never hacked.

DRAFT PROPOSAL
We are also proposing to describe the protocol in 3 major pillars.
· DAO
· Technology (To be revised at later???)
· The Token

The first pillar has been in almost no existence until today, and we need to recognize it is no less important, becoming priority in any relevant protocol given the conditions of the industry and regulations. There is no reason to stick in the past, and the current proposal has the overall objective to establish an interim DAO structure with the single objective to create a permanent DAO framework that will allow Ren to dominate the space.

This proposal is focused on:

· Approve the creation of an interim team to carry out the design of DAO structure to be sent for comments and approval to the community. The DAO framework shall cover at least
o Definition of Mission and Vision
o Scope and framework of DAO:
1- Areas of responsibility of DAO
2- Organigram
3- Roles and Responsibilities of positions of future permanent members of DAO
o Performance key indicators to evaluate DAO
o Budget proposal

It is very important to emphasize that this interim team shall have the responsibility to represent the community and any proposal raised by the community is to be considered. Rumors that Binance was looking to acquire multichain protocol Ren caused the protocol's native REN token to soar 32% to $0.1061.

Here are some diagrams just brainstorming this out. It’s a very loose sketch of what the dao/foundation/governance framework could look like. Grey indicates Ren project infrastructure (code, hardware, and/or formal structures).

Where is this missing information or misguided? 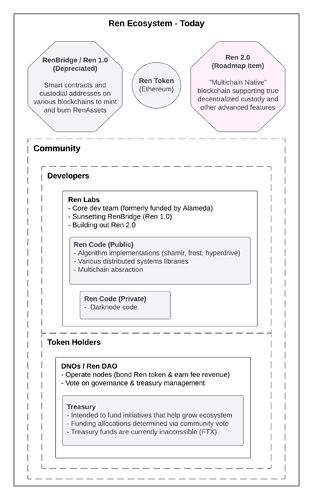 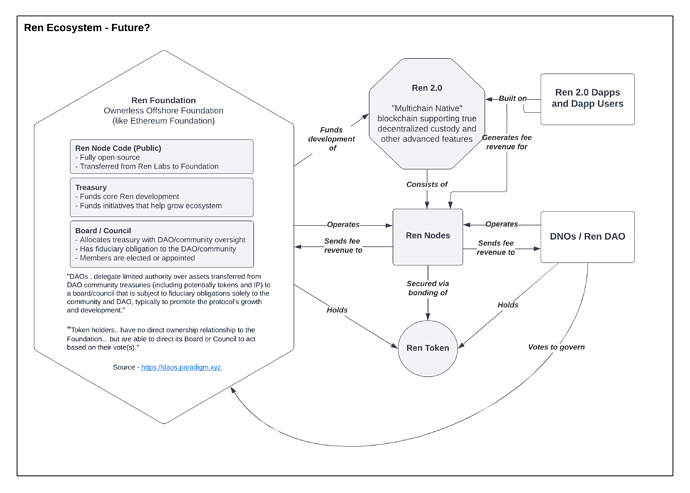