Wen’t on a small rant in th telegram groups but might be more appropiate to post here. Would love to hear the thoughts of the community and the ren team as well. thanks 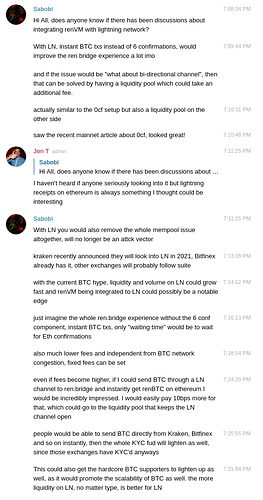 Sounds interesting. Not sure how difficult/viable it would be from a technical perspective, but might be worthwhile to look into?

Is this something that could be build on top of RenVM by a 3rd party, or does it require direct integration at the protocol level?

I have a hard time seeing it seperate from renVM as BTC on LN is not same as baselayer BTC. There are tradeoffs probably, I saw it was mentioned in past in the telegram group, sounded like it has been considered. At the same time things are moving fast on that front as well, LN might be much easier to integrate in future so who knows.

Also in fairness, I rather see the team do their thing as I am very much in favor of the components that are coming (expanding greycore, sharding etc), the rant I went on can be discussed at a later stage as well.