While Ren Labs explores fundraising options with investment funds, it would be prudent for RenDAO to explore alternative options that it may find more agreeable. One such option is a revenue-based fundraise in which any Ethereum account could make an investment and be paid back a multiple of that investment using Ren’s future revenue.[1]

This would eliminate the need to inflate REN for the sole purpose of raising capital, which would otherwise permanently dilute the value of REN and Darknode revenue. It would also allow the treasury to be owned and managed by a Swiss not-for-profit foundation (“Ren Foundation”), which would be tasked with providing funding to Ren Labs. This structure would enforce the transparency and alignment of incentives that the community has always sought.

Investors would earn n nodes’ worth of revenue each epoch, where n is the number of nodes their investment was worth when it was made. For example, if one node cost $10k at the time of investment, then a $30k investment would earn 3 nodes’ worth of rewards each epoch. During this time, investors and node operators would be earning revenue in parallel for providing capital and security, respectively. Once a multiple of all investments were paid back in USD terms, investors would stop earning revenue altogether. That multiple could either be fixed (e.g. at 1.5) or sealed-bid reverse auctioned, discussed later in this section.

This investment structure would dilute operators’ revenue over a finite payback period, but once that payback period were over, operators would resume earning all of the revenue without having printed any tokens. In comparison, if RenDAO chose or had to print REN to raise capital, that would permanently dilute both the value of REN and node revenue, as the newly-printed tokens would unlock more nodes. It is the difference between temporary and permanent dilution.

The chart below shows what the relationship between USD raised, operators’ temporary revenue dilution, and Labs’ runway based on a $700k quarterly budget would look like if the fundraise were held at the time of writing with 2,040 registered nodes each worth $11.3k. For example, if nodes were to earn an average of $500 per epoch over the next 2 years, then a $3m raise with a return multiple of 1.5 would dilute operators’ revenue by 11.5% for 31 months but give Ren Labs 13 months of runway. Different scenarios could be provided when soliciting investors. 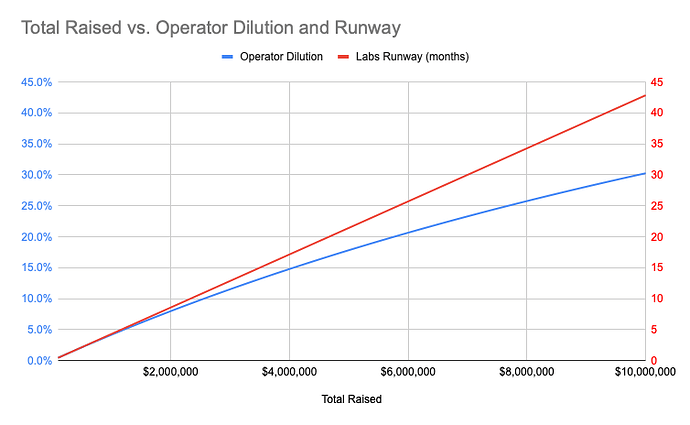 revenue-based fundraising chart754×465 34 KB
A Google Sheet with more estimates and the formulas can be accessed here.

By the time the capital runs out, Ren 2.0 would be expected to generate enough revenue to fund Ren Labs on its own. Labs would periodically receive a fixed USD amount representing a decreasing % of total protocol revenue as that revenue increased over time.

And if we assume these funds will eventually be sold to finance operations, it may make sense to require that investments be made in whitelisted, non-REN assets to avoid putting sell pressure on REN.

A fixed return multiple means that all investors would be paid the same return on their investment. But deciding what that multiple should be without engaging any investors could be costly.

One alternative is to make the fundraise a sealed-bid reverse auction, where each investor would privately bid on one or more multiples they were comfortable with without being able to see anyone else’s. The lowest-multiple bids would be accepted up until a satisfactory USD amount were raised, and the rest would be rejected. Here’s how that would work.

The Foundation would provide (1) a form for investors to provide their Ethereum address and desired multiple(s), and (2) a special smart contract for investors to transfer tokens to. The form would allow the Foundation to match the transfers that each Ethereum account makes on-chain with the multiple(s) they bid on off-chain. The Foundation would then accept the lowest-multiple investments until a satisfactory USD amount were raised and reject those with multiples deemed too high.

The form could be built to incentivize investors to stack their bids. For example, $x at 1.25, $y at 1.5, $z at 1.75, etc. The Foundation would scoop up those 1.25s and work up the order book until enough USD were raised.

The nature of a private order book could produce more total USD and more favorable terms in aggregate than a fixed multiple, as investors wouldn’t know if other on-chain transactions were competitive or stink bids.

Next, let’s understand the importance of a Swiss not-for-profit foundation, which @Susruth has already explained well:

The main reason for a foundation to exist, is that without a legal real world entity everyone who is contributing to or governing Ren would be legally liable to things that are not under any one person’s control. Ideally we could create a legal entity that can legally be controlled by the DAO, and all the DAO participants have limited liability similar to the equity holders of a company. The idea of the foundation would be to get as close to this ideal as possible and protect everyone involved. (source)

Considering the legal implications of fundraising and moving money around, it is imperative that RenDAO delegate tasks to an entity that can act on its behalf in a legally compliant manner.

If the Foundation were to conduct its own revenue-based fundraise, manage the treasury, and provide funding for Ren Labs, it would derisk the ecosystem of incentive misalignment between the community, investors, and core team (as was the case with Alameda) without imposing permanent dilution on stakeholders. While that is baked into this proposal, parts of that could (and should) be made a condition of alternative fundraising methods, particularly those proposed by Ren Labs.

We are all rooting for Ren Labs to present an agreeable fundraising proposal. Whether they are able to or not, it is in the best interests of the protocol for the community to exhaust its options, be heard, vote, take action, and not wait around to do so. It would be better to make progress on proposals like this and shelve them because a better proposal was presented than to make no progress and be left scrambling because no better proposal was presented.

Very interesting read. I think this is a good proposal and I’m glad to have you as part of the community.

I really like this proposal. Thank for putting this together. This is a very straight forward solution, not complicated at all. Raise 2MM$ will reduce in less than 10% the revenue for darknodes,

I am really concern about raising funds thru VC. This proposal could potentially give us another way to move forward the project.

Thank you for raising this RFC. I also believe that exploring ideas early is in the community best interest.

My opinion on this proposal is that is overall positive but I do not like the fact that relies in many unknowns. Once ren 1.0 is sunset, we will not know when ren2.0 will start, when nodes will start earning again, how much volume would we have. We already made decisions in the past counting on revenue that never came.

Regarding the voting, I would prefer to listen to the team proposal before moving this one to a vote.

While I think its interesting, I find it to be a more complex version of simply funding the team from darknode rewards.

I’d much rather the core team present an annual budget that can be debated and voted on by darknode holders.

A portion of of darknode rewards can be diverted to meet the operating costs as stated in the budget into a multisig thats managed by the core team and representatives of the DAO.

A fundraise would introduce a new set of stakeholders and a more expensive source of funds relative to simply funding the team off revenue - added complexity, at a higher cost, and increased legal exposure.

With RenBridge being sunset, the protocol may not have any revenue for some period of time, let alone enough to fund Ren Labs and for nodes to continue providing security to Ren 2.0. One way around the security issue could be to promise nodes that stay registered a greater share of future revenue, but there’s still no guarantee of capital being available in the short term.

I think this solution could really be effective without dabbling into the circus of tokenomics.
played with the chart and i like that we can actually adjust the payback period beyond 2.6years too-
There are certain assumptions on node rewards having $500 /epoch + no. of operators at 2k. So we still have to see how Ren 2.0 performs.

Darknode operators are not incurring the risk here. Investors are, who will be sold on the potential of Ren 2.0, which will include the same proven revenue as Ren 1.0. Same incentives as any type of capital raise.